Tarot is a deck of 78 cards, arranged into two sections. 22 of these are what we call the major arcana and include cards like the Lovers, Juudgement and the Devil. The remaining 56 cards are divided into 4 suits: Wands, Swords, Cups (or Chalices) and Pentacles (or Coins) with each suit having 14 cards.

What I find really interesting is that people often don’t realize that when tarot cards were originally invented they were not invented as a device for fortune telling. They were created in the early 14th/15th century as a deck of playing cards used to play the game tarocchini/tarocchi (which is still played sometimes today) which at its heart is a game of collecting points for sets and runs of cards (it sort of reminds me of the game Rummy although I have been told that the way the game is traditionally played is more like Bridge) 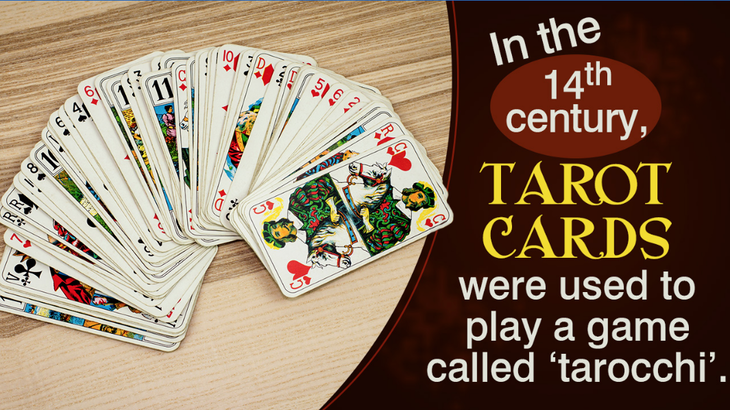 In those early days the decks were all hand painted and as such would have been more common for wealthy people - and let's face it, wealthy people would have had more time and inclination to play cards, right?

Today the oldest surviving tarot cards are the Visconti-Sforza cards from 15th century Italy. They were commissioned by Filippo Maria Visconti, Duke of Milan, and by his successor and son-in-law Francesco Sforza - hence the name. There are about 15 "decks" still around, but not a single one is a complete deck. They reside in museums, libraries and private collections around the world. They highlight the Renaissance period and were veritable works of art in their time (and in my opinion still today!) utilizing lots of color, and also GOLD. This was the period of illuminated manuscripts, and the tarot cards were no exception to this treatment.
It wasn’t until the late 18th century that the first decks for the purpose of divination were created. Jean-Baptiste Alliette, a French occultist was the first to really be documented for using tarot cards for divination. He published works about how the cards corresponded to astrology, the elements and even the four humors (which was still very much a thing back then) and in 1788–89? he released a modified tarot deck created specifically for his purposes, which is the basis of the tarot decks of today.

Specifically, he advocated use of the piquet deck to which he added one nontraditional card called “Etteilla”.  The piquet deck, which was a popular shortened pack typically used for gaming, employed the common French suit system (Clubs, Spades, Hearts, and Diamonds). Piquet was a common game at court, having been played through history by the royals of Spain, France and England. Anne Boleyn was said to be particularly good at the game, as was Elizabeth I. The game of piquet was popular with a wide variety of people through the 18th century and was even considered the "national game of France" up until it fell out of favor after World War II.
​

Does tarot tell the future?

Yes and No. A large enough Tarot spread can give you a very keen sense of the probabilities inherent in a situation, but the specific way that things turn out are, in the final analysis, up to you -- how well you adapt to the ever-changing conditions that your  reading reflects. A tarot reading gives a snapshot of what is going on in the present, the time the cards are being chosen. It can help you see aspects of a situation that have been invisible to your ego. Some people are able to combine their knowledge of the tarot with psychic abilities in order to "tell the future" - I prefer to help clients take the knowledge from the cards and use it to craft a plan for you to create the life that you want.

How does it work?

I don’t know. But I know that it does work. Especially when we approach it from a place of self-examination, growth, and healing. You can believe that energy, the universe and/or guides bring up specific cards for us or you can choose to believe in randomness and find value in it either way.  There’s no dogma when it comes to approaching the tarot. The value of it lies in having an open and curious approach to the cards and yourself. Tarot has even begun to find a place in therapist offices as a tool for reflection and self-discovery.

​The tarot is what you make it, so the most important part is to be willing open up to the messages the cards have and let it assist you in examining your life in a healthy and productive way.

Who is tarot for?

The short answer: Anyone who’s curious about it. I believe tarot can benefit anyone who is open to it and wants to learn and grow in this lifetime.
It’s great for: Those feeling stuck or undergoing a transformation, people healing from past traumas, anxious folks, mamas and caregivers, purpose seekers, nervous system balancers, individuals looking for clarity and alignment, anyone who wants to uncover their strengths and superpowers and feel supported.

So are all tarot readers the same?

Tarot is a complex language, and every reading is different; similarly, every reader and the methodology they use to interpret the way the cards interact is different. It may help to think of a reader as someone who can translate a language for you. The people I have seen over the years to do my readings have all come from different backgrounds, have different styles of reading cards and use their own unique flourishes to work with clients, such as incorporating astrology and/or mediumship, or from a trauma-informed therapeutic background.  I have a friend who specializes in connecting with people who have passed, and another that uses her background in sex therapy to deliver amazing guidance on sex and relationships. I am well versed in many areas, but my specialties are relationships and past lives.

Sadly, there is a big misperception out there that Tarot is evil, it’s the work of the Devil, we’re all worshipping Satan, etc... Often, this is a result of what we’re hearing in media, and a lot of religious beliefs are very anti-Tarot and do believe that Tarot is evil.
If you do a Google search in Google News and enter “Tarot,” unfortunately, you find a lot of news posts about the psychic Tarot reader who scammed this poor lady out of $500,000 because she told her that she had a hex, and she could only remove it if she was paid $1,000 at a time. They’re awful stories, but what they also do is they portray Tarot and people who read Tarot in a really negative way, and we know that not everyone is a scammer! It’s awful. In fact, the scammers make up a very tiny percentage of all people who read Tarot. Now, the other place that media often comes into with Tarot is film. Think about movies where you’ve seen Tarot cards or even in TV series. Often, Tarot cards are presented in a way that you’ve got this mysterious woman sitting at this little round table with her crystal ball and her Tarot cards laid out. She flips over the Death card, and then suddenly, the other person falls dead, and it’s all chaos, right?

Now, when it comes to religious beliefs, it’s a similar story, but it’s often around this idea that Tarot is sinful. Tarot cards are often associated with divination. They’re not necessarily always about divination, but in the Bible, what it says in Leviticus: “Do not practice divination or seek omens.” The Bible actually includes many instances where people have practiced pulling lots, interpreting the weather, interpreting dreams etc. to determine the will of God for themselves.  There is a method of divination known as Cledonism. Cledonism is when you hear things which have spiritual significance. Cledonism appears in the Bible and is recommended by God:
​
Whether you turn to the right or to the left, your ears will hear a voice behind you, saying, “This is the way; walk in it.”
— Isaiah 30:21

Those who speak about the Bible condemning the cards should remember that the deck was not invented until centuries AFTER the bible was written. And while there are aspects of the Bible that speak to fortune telling and sorcery being bad, NOT EVERY PERSON follows the Bible or Christianity. There are some 4000 religions around the globe, each with their own set of beliefs. So to tell people that they are engaging in evil, or inviting demons into their life displays an arrogance and a superiority that is astounding. I even know some amazing readers who believe in both the cards and God. Once I was even told that "I have this talent, and I believe that God gave it to me to be able to help guide people" and it is hard to argue with that!

At the end of the day though I am not here to make you uncomfortable or to judge you for your beliefs. If you have never experienced tarot before I would ask that you give it a try before you dismiss it. But if your beliefs tell you that Tarot is a tool for evil I will disagree, but I will respect your right to feel that way.